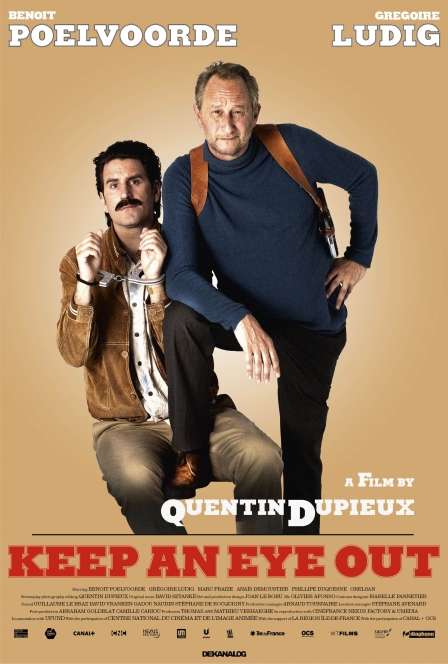 The latest deranged delight by French absurdist Quentin Dupieux, Keep An Eye Out is a breakneck-paced cop

comedy that packs more laughs into its 73 breezy minutes than some filmmakers manage in their entire careers.

an average Joe who discovered a dead body outside his apartment building. As the film begins, Fugain must, on an empty stomach,

explain how and why he happened to leave home seven times in one night before coming across a corpse in a puddle of blood.

Since he’s the investigation’s only suspect, Fugain’s anxiety is already sky-high when Buran leaves him alone with Philippe,

a one-eyed rookie cop with bizarre speech patterns and a few minutes to live. Bloody, batshit hijinks ensue, and before long, we’re in Buñuel territory.

Between the opening sequence, when a man in just red briefs conducts a philharmonic orchestra in the open air, and the triple-meta

You’ll never look at a protractor or an oyster the same way again. (Not Rated)

Streaming Instructions:
* Tickets are $10.00 (50 % of ticket sales goes to The Flicks)
* Once ticket is purchased you'll have 7 days to start watching and 72 hours to finish once you have started.
* For instructions, troubleshooting and information about how to watch on various devices go to: https://watch.eventive.org/help