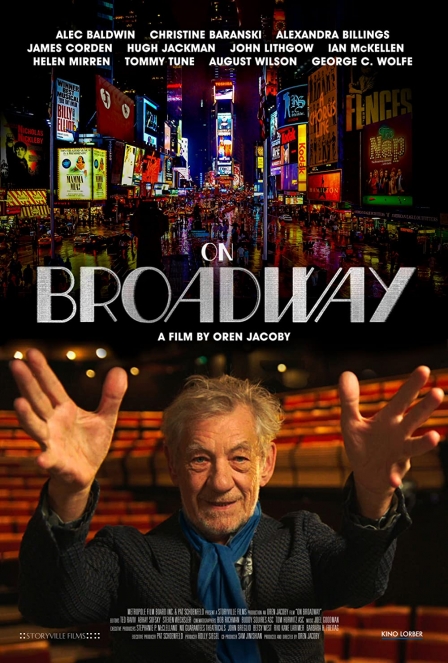 An all-star cast tells the inside story of the Broadway theater, and how it came back from the brink thanks to innovative work, a new attention to inclusion and a sometimes uneasy balance between art and commerce. Legends of the stage and screen, including Helen Mirren, Christine Baranski, August Wilson, James Corden, Alec Baldwin, John Lithgow, Viola Davis, Hugh Jackman and Ian McKellen, take us behind the scenes of Broadway's most groundbreaking and beloved shows, from "A Chorus Line" to "Hamilton." Iconic performances by Lin Manuel Miranda, Patti Lupone, Bernadette Peters, James Earl Jones and Mandy Patinkin lead the way on a hurly burly ride through Times Square, once again the main street of American show business in ON BROADWAY, directed by Academy-Award nominee Oren Jacoby. (Not Rated)

"This smart and spirited film reminds us that there's still nothing in American entertainment like the Broadway ritual of hundreds of live, superbly talented performers playing to thousands of live, rapt theatergoers six nights a week." Joe Morgenstern, Wall Street Journal